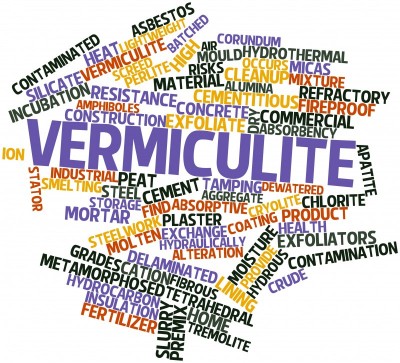 insulation have different benefits and drawbacks, but are both safe, non-toxic materials that are safe for use in your home. The same cannot be said for older forms of insulation that can sometimes still be found in offices and houses throughout Vancouver.

Vermiculite is a material formed by the alteration of biotite or phlogopite, both part of the mica group of minerals. First described in 1899, it is still used today for many purposes across numerous industries. Vermiculite has fire-resistant and insulating properties, so it was a natural choice for use as insulation in homes. Pure vermiculite is non-toxic, but the conditions under which vermiculite forms can also cause the formation of asbestos. We now know that prolonged inhalation asbestos fibers can cause a host of serious heath problems, including lung cancer. But for much of the 20th century, asbestos was present in all kinds of industrial products.

A mine in Libby, Montana was the largest supplier of vermiculite in the United States. It produced insulation under the name Zonolite at facilities across the United States and Canada. All of the vermiculite mined at Libby was contaminated with asbestos. Production at the mine shut down in the 1990’s after evidence of the health risks posed by exposure became impossible to ignore. Today, all vermiculite mines are carefully checked for any asbestos contamination. But Zonolite insulation is still being discovered inside old homes.

If your house was built before 1990, you should be very careful that no contaminated insulation is still present. Zonolite is usually grey or silver in color, and has a rumpled, folded texture. It usually lays flat rather than puffing up like fiberglass. If you spot something that looks like Zonolite insulation, you can buy an asbestos testing kit at a hardware store to make sure. Once you determine that contaminated vermiculite is present in your home, you should contact a professional asbestos removal company and let them determine what needs to be done. Trying to remove this material on your own can be extremely difficult and unsafe, so don’t take the risk. Urban Environmental is experienced at spotting even the smallest amounts of asbestos-contaminated vermiculite, and we know how to safely remove this dangerous material from your home. If vermiculite containing asbestos is not handled carefully during the removal process, small particles can be left behind. Urban Environmental has the technology to remove this dangerous containment quickly and safely. We do a thorough check of your home to make sure that nothing has been missed, and our experienced technicians ensure that your home is not damaged during the removal process. Discovering that you have been exposed to asbestos can be frightening, but if you act quickly to remove the contamination you keep your risk of exposure-related health problems low. If you live in an older home that has not been thoroughly inspected for asbestos contamination, do not delay. Contact the professionals at Urban Environmental and let us restore your peace of mind.