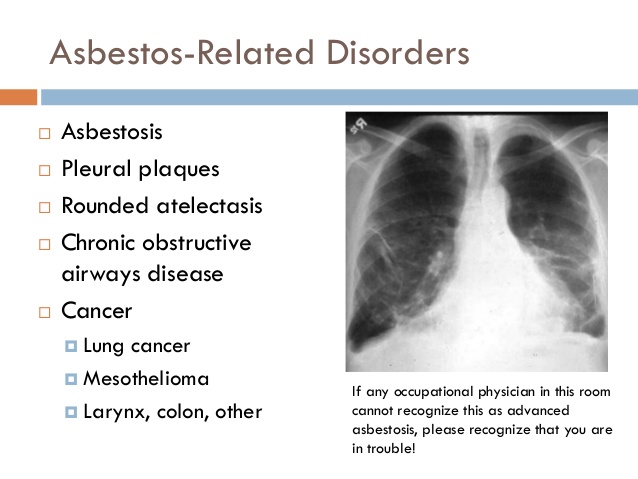 This is a continuation article on on asbestos-related disease listing, detailing some of the most debilitating and deathly asbestos-caused diseases.

Many thousands of scientific & medical publications have chronicled the understanding of the plethora of hazards of asbestos to human and other air-breathing, and even aquatic life. The development of today’s level of understanding began during the industrial revolution -most notably from the textile factories and mineral mines of Great Britain, Canada and the United States

This body of knowledge is frequently referred to in mountains of asbestos related litigation that has been taken to the courts since. Related medical publications have been used for determining if an asbestos using company acted within the bounds of negligent behavior.

The following list of diseases regarding asbestos fibers as it pertains to humans:

Asbestosis was given that name as it is the most common asbestos-caused chronic lung disease. Generally Asbestosis implies scarring of the lung tissue; which results from prolonged exposure to asbestos. It’s other longer definition is “diffuse interstitial pulmonary fibrosis’. The lungs are directly affected and the disease typically manifests after 15+ or more years from initial and prolonged exposure to airborn fibers.

Asbestos-related fibrosis is “progressive” because it continues to progress in the lung tissue; even if no further asbestos is inhaled. Scar tissue hardens the lungs, limiting elasticity.

The sharp jagged fibers scars the lung tissue and causes the alveolar walls to thicken, which reduces lung capacity and leads to the patient experiencing shortness of breath (dyspnea).

There is no cure for asbestosis and its progression cant be halted, but most symptoms are minimized with medication and oxygen supplementation. Sufferers have an increased risk for cancerous malignancies and for heart failure.

Symptoms of lung cancer include chronic cough, chest pain, breathlessness, haemoptysis, (coughing up blood), vocal hoarseness and wheezing, weight loss and fatigue. Treatment involves surgical removal of the cancer, chemotherapy, radiotherapy, or a combination of procedures. Prognosis is generally poor unless the cancer is detected in its early stages. Out of all patients diagnosed with lung cancer, only 15% survive for five years after diagnosis.

Thanks to informational commercials and infrequent news reports, most people have become aware that asbestos exposure causes mesothelioma and lung cancer. However it is less generally known that asbestos also causes/promotes cancer of the voice box (larynx) and female ovaries.

Also asbestos actually causes more benign conditions than cancerous ones. Familiarity with these other asbestos-related diseases helps those previously exposed know what symptoms to watch out for as signs of a developing condition.

Noncancerous asbestos conditions range from mild & nonthreatening to severe & life-threatening. Modern treatments and medications have improved quality of life for people coping with these conditions.
Some of the asbestos diseases listed below are life-threatening. However, an early diagnosis can make all the difference in terms of survival.

Laryngeal cancer is rare and most often caused by smoking in combination with alcohol consumption. Yet a 2006 report sponsored by the National Institutes of Health proved that asbestos exposure causes cancer of the larynx, known as the voice box. In 2012 the IRAC confirmed the connection in a scientific review of all evidence to date.

Researchers suspect that inhaled asbestos fibers lodge in the voice box on the way to the lungs. Treatment varies by cancer stage and involves surgery, chemotherapy and radiation therapy. The prognosis for small tumors that haven’t spread to lymph nodes is good with cure rates between 75 and 95 percent. If caught early enough, radiation therapy may offer a cure and preserve the patient’s voice.

Though it only represents 3 percent of female cancer diagnoses, ovarian cancer causes more deaths than any other female reproductive cancer. In 2012, a IARC study confirmed that asbestos exposure causes ovarian cancer. Many cases were documented in women whose father or husband worked with asbestos.

Though the exact mechanism for how asbestos fibers reach the ovaries is under debate, researchers theorize the fibers are transported by the lymphatic system. Some cases were associated with talcum hygiene products that were contaminated with asbestos.

Ovarian cancer is treated with surgery, chemotherapy, radiation therapy, hormone therapy and targeted therapy. The overall survival rate for all types and stages of ovarian cancer is 45 percent. A fortunate 15 percent of cases are diagnosed in stage I and have a 90 percent survival rate.

While conditions like asbestosis and lung cancer affect lung tissue, other conditions affect the lining of the lungs known as the pleura. Mesothelioma is the only cancerous disease that affects the pleura, yet asbestos can cause several benign conditions to develop in the lung lining.

As scar tissue accumulates on the lining of the lungs, collagen deposits called pleural plaques can develop. Plaques most often form on the outer layer of the pleura that lines the rib cage. Between 5 and 15 percent of plaques become calcified and harden as a result. They rarely cause symptoms, but some plaques may cause pain and could require medication.

Inflammation caused by asbestos can weaken blood vessels, causing them to leak fluid. This fluid builds up within the pleural layers, called pleural effusion, and can interfere with breathing and cause pain if left untreated. A procedure called talc pleurodesis can permanently prevent fluid buildup.

Pleural effusions often precede extensive scarring and thickening of the pleura, known as diffuse pleural thickening. As the pleura becomes rigid and thick with scar tissue and lung function is compromised, pain may develop. Medications for pain, bronchial dilation and steroids offer relief from symptoms.

If you have a history of asbestos exposure and develop any abdominal, pelvic or pulmonary pain or dysfunction, visit a primary care doctor or specialist immediately. Prognosis is improved and treatment is more effective for all asbestos-related conditions when diagnosed early.

The pleura appears to be more sensitive than the lung parenchyma to the effects of asbestos fibres. Thus asbestos-related pleural diseases can result from much lower doses than the fibrotic changes in the lung.
Pleural plaques

Pleural plaques are the most common manifestation of asbestos exposure, affecting up to 58% of asbestos-exposed workers. The prevalence among the general population exposed environmentally ranges from 0.53 to 8%. Pleural plaques are discrete circumscribed areas of hyaline fibrosis (patches of thickening) of the parietal pleura and rarely the visceral pleura; which develop 20 to 40 years after first exposure. Over time, usually more than 30 years, they often become partly calcified. They consist of mature collagen fibers arranged in an open basket-weave pattern and are covered by flattened or cuboidal mesothelial cells.They have a white or pale yellow shaggy appearance and are typically distributed on the posterolateral chest wall, diaphram, and mediastinal pleura. The number and size varies. Pleural plaques are typically asymptomatic, however, there is still some controversy on this topic.

Benign asbestos pleural effusion is an exudative pleural effusion (a buildup of fluid between the two pleural layers) following asbestos exposure. It is relatively uncommon and the earliest manifestation of disease following asbestos exposure, usually occurring within 10 years from exposure. Effusions may be asymptomatic but rarely, they can cause pain, fever, and breathlessness. Effusions usually last for 3–4 months and then resolve completely. They can also progress to diffuse pleural thickening. Diagnosis relies on a compatible history of asbestos exposure and exclusion of other probable causes.

About half of all people with severe asbestosis develop a condition known as clubbed fingers. The tips of fingers become misshapen, swollen and may take on a box-like appearance. The condition appears to be caused by the biological effects of asbestosis rather than directly by asbestos fibers.

Clubbed fingers tend to develop early and dont go away once developed. It is a sign of more severe asbestosis and is associated with higher mortality and likelihood of disease progression.

Rounded atelectasis (also known as Blesovskys or folded lung syndrome) develops from infolding of thickened visceral pleura with collapse of the intervening lung parenchyma. It presents radiographically as a mass and may be mistaken for a tumour. On a CT scan of the chest it appears as a rounded mass like opacity in the peripheral lung adjacent to thickened pleura and with curvilinear opacities which are the bronchi and vessels (comet tail).

Rounded atelectasis is the least common asbestos-related benign pleural disease. Exposure to asbestos is the most likely cause today but it can occur following other medical conditions. It is a chronic condition and usually asymptomatic.

Asbestos is perpetually and persistently dangerous. It should have never been used in building material for homes and offices.

Leave it to the professionals at Urban Environmental to diagnose the contamination level of a designated area – and to properly, effectively, and lasting resolve the situation for the health benefit of all those who frequent a contaminated building.

Urban Environment is the superior choice for Asbestos Removal Service in the entire Lower Mainland.