The most harmful disease associated with Asbestos Exposure “Mesothelioma” 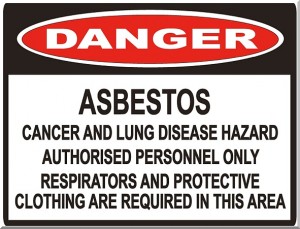 It is now generally known in modern times that airborne asbestos exposure is dangerous and harmful to a person’s health.

The 3 types of “asbestos-related lung disease” are: 1) scarring (“asbestosis”), 2) non-cancerous disease of the tissue of the lining of the surface of the lung (“pleural disease”), and lung cancer (of the lungs or their outer lining tissue [“mesothelioma”]).

In this first of a short series of articles, we will go into detail about the worst of the batch, that is “mesothelioma”.

Airborne asbestos exposure has been directly ( and unmistakably ) linked to the development of serious respiratory diseases & cancers, including “mesothelioma”, lung cancer, asbestosis, and other conditions. Asbestos exposure is most prominently related to environmental, occupational, and second-hand factors.

For the past century, asbestos has become one of the most commonly used materials in various industries such as: commercial and home construction, shipbuilding & a variety of manufactured products.

Despite the countless clues that asbestos is dangerous, going back since the turn of the century, it was not until recent modern times that researchers officially established the connection between asbestos exposure and serious respiratory conditions. Although evidence was scientifically documented and presented in the early 1920’s, by then it was persistently covered-up by asbestos industry lobbyists and corrupt government officials.

However, by then too many millions of workers had been exposed in the workplace, in their homes, and in other locations. While US government asbestos exposure limits were imposed in 1972, an estimated 10,000 people in the United States continue to pass away each year from related illnesses; and a proportionate numbers of Canadians – although those numbers vary from report to report.

Asbestos exposure occurs when a person (or animal – or fish) inhales, ingests or swallows microscopic asbestos fibers. In very trace amounts it is part of our atmosphere. most everyone breathes in at least some trace amounts of asbestos from the outside air – but these trace amounts rarely cause health problems. No level of asbestos exposure is considered perfectly safe, but most asbestos-related illnesses arise after heavy and/or repeated (generally occupational) exposures.

Construction work & home renovations are known to be especially hazardous as so many common building materials have contained one of the several forms (chemical compositions) of asbestos. When asbestos products start to deteriorate – or someone physically sands, saws into, drills or otherwise disturbs the crystalline fibers it then begins releasing microscopic fibers, seemingly invisible they dissolve into the surrounding air.

Asbestos fibers, most often smaller than dust particles, can remain/floating (known as a “colloidal” solution) airborne for hours… placing air breathing life-forms nearby in danger. Once the microscopic, jagged, and insoluble crystal fibers are inhaled – each particle becomes trapped in the respiratory tract & lungs, where these fibers will most probably stay forever.

So over lengths of time, asbestos fibers incrementally accumulate in the lungs; consequentially causing inflammation & tissue scarring. When too much has been inhaled, breathing becomes increasingly difficult , more of a task rather than an involuntary motion. These crystals are sharp and abrasive – damaging tissue and even DNA strands – thereby leading to cancer, and other illnesses. Both a pro & a con: symptoms of these diseases usually doesn’t appear until 1 to 4 (or more) decades after the exposure initially (or again, incrementally accumulated) occurs.

Each year, approximately 2,000 to 3,000 Americans are diagnosed with mesothelioma, a rare cancer caused almost exclusively by asbestos exposure and similarly in number, 2,000 to 3,200 people die from asbestos-related lung cancer annually. An estimated 1/4 million people in the North America are currently are living with “asbestosis”, an inflammatory lung condition caused by inhaling asbestos.

Malignant mesothelioma is an asbestos-exposure related cancer that forms on the thin protective tissue that cover the lungs and abdomen.

Asbestos is the single largest cause of occupational cancer in Canada and the United States.

Asbestos can directly cause 4 distinct malignancies and may increase a person’s generalized risk for development of several other types of cancers apart from the chest cavity. Although any significant (non-trace) amounts of exposure can cause cancer,people who inhaled or ingested large amounts of asbestos fibers for extended periods of time retain the highest risk of developing these cancers.

Mesothelioma is the signature asbestos-related cancer. It is also one of the most deadly related diseases, causing between 2,000 and 3,000 deaths each year in the United States alone; together with a similar ratio/proportion for Canadians. On average, the prognosis for subsequent longevity is less than 1 year from the time of diagnosis.

Although asbestos material application in Canada (and the US) has declined sharply in recent decades – a continuous stream of people are still coming down with mesothelioma. The main reason for it is that typically it takes anywhere from 20 to 50 years (after asbestos exposure) before symptoms even appear.

While there’s no known (or possible) cure for mesothelioma, researchers have made significant achievements in their understanding of the metabolic activity of the cancer and thus are developing new treatment options and alternative therapies.

How Does Asbestos Cause Cancer?

Mesothelioma clusters are typically linked back to people who were exposed to airborne asbestos in the workplace: shipyards, industrial factories, auto repair shops, older houses, schools and various other public buildings. Up to 70-80% of people with mesothelioma were exposed to asbestos at work. Normally it takes long-term exposure to put a person at risk, however short-term and even 1-time exposures have also been linked to this cancer.

When inhaled or swallowed these microscopic fibers over decades, the trapped fibers trigger biological changes that can cause inflammation, scarring and genetic damage that is often the precursor to cancerous tissue growth. The lengthy gap between asbestos exposure and diagnosis is called the “latency period”.

Asbestos fibers most often become trapped in the lining of the lungs, the pleura, but they usually also lodge into in the lining of the abdominal cavity from swallowing fibers mixed with saliva or heart post-asbestos-digestion/absorption into the body. Once fibers cause biological damage, the stage is set for the decades-long latency period for the development of malignant mesothelioma.

A study conducted in 2013 revealed that about 125 million people across North America have been exposed to asbestos at work. It was found that the high rates of disease occurred in people whom: mined asbestos, produce products from asbestos, work with asbestos products, live with asbestos workers, or work in buildings containing asbestos. Washing clothing/laundry of someone who worked with asbestos also increases the risk.

The diagnosis may be suspected based on chest x-rays, or CT scans and then confirmed by either examining the fluid produced by the cancer or a tissue biopsy.

Treatment often includes surgery, radiation therapy and chemotherapy. The percentage of people that live more than 5 years more following diagnosis of mesothelioma is on average 8% (from the largest study conducted in the United States).

Diagnosis typically occurs after the age of 65 and most deaths occur around 70 years old. The disease was extremely rare before the commercial use of asbestos. Talc miners were some of the first cases reported – before the industrialization of asbestos.

These symptoms may be caused by mesothelioma or by other, less serious conditions:

· Wheezing, hoarseness, coughing, shortness of breath
· Chest wall pain
· Pleural effusion, or fluid surrounding the lung
· Fatigue or anemia
· Blood in the sputum
· In severe cases, the person may have many tumor masses. The individual may develop a pnuemothorax or collapse of the lungs. The disease may metastasize; spreading to other parts of the body.

Tumors that affect the abdominal cavity often do not cause symptoms (until the tumors are at a late stage).

· Abdominal pain
· Ascites, or an abnormal buildup of fluid in the abdomen
· A mass in the abdomen
· Problems with bowel function
· Weight loss
· Blood clots in the veins, which may cause thrombophlebitis
· Disseminated intravascular coagulation, a disorder causing severe bleeding in many body organs
· Jaundice, or yellowing of the eyes and skin
· Low blood sugar level
· Pleural effusion, severe ascites
· Pulmonary emboli, or blood clots in the arteries of the lungs

Family members and others living with asbestos workers have an increased risk of developing mesothelioma, and possibly other asbestos-related diseases.This risk may be the result of exposure to asbestos dust brought home on the clothing and hair of asbestos workers – via washing a worker’s clothes or coming into contact with asbestos-contaminated work clothing. To reduce the chance of exposing family members to asbestos fibres, workers are usually required to shower and change their clothing before leaving the workplace.

Many building materials used in both public and domestic premises prior to the banning of asbestos may contain asbestos. Those performing renovation works or DIY activities may expose themselves to asbestos dust.
Call the professionals at Urban Environmental to cleanup dangerous asbestos containing homes and other work-sites!